Dangerous is one thing. Deadly is something else.

When Clodagh Shepherd’s curiosity gives way to obsession, her thoughts turn to revenge.

In the wake of her husband’s affair and subsequent disappearance, Clo makes an impulsive decision to befriend the beautiful stranger who has stolen her life. Answering an ad for a home help, she moves into the home of her husband’s mistress and is immediately drawn into the chilling reality behind the idyllic façade of Hamptons Life. Central to her terrifying nightmare is a deadly secret–a secret someone will kill to keep.

Oh my goodness, this thriller is non-stop! Clodagh and her husband Ryan split up after she discovered his affair, and in the wake of that Clo decides to apply for a housekeeper job at his mistress’ home!

At the very start of this novel it’s clear that Clo has been beaten by her husband and has been left feeling quite anxious about how he’s treated her and about his affair. She very quickly decides that she wants the upper hand and so begins her mission to find the woman he cheated with and to inveigle her way into her life. She also wants to know where her husband has gone and thinks this woman holds the answers she needs.

I did find the opening chapters a little difficult to get my head around as the pace of this novel ramps up really quickly and I wasn’t sure exactly what was going on. But once Clo finds her husband’s mistress and decides to apply for a job in the same house I was utterly gripped!

Once Clo gets the job as home help the book really takes off. It’s clear right away that while Clo isn’t being honest about who she is that Marion is naturally wary of her. I felt like neither woman could be trusted and so begins something of a game of cat and mouse between them. It was fascinating to read how they were with each other because some female friendships start off with women being very distrustful of each other and in this novel that just seems to grow. There is an appearance of friendship but it doesn’t ever feel very real. I found myself utterly engrossed in the novel wanting to know how it could possibly end!

To heighten matters further Clo and Marion have a look of each other, and I could sense there would be increasing tensions around this – especially from Clo, who knows that Marion had an affair with her husband. It must be horrendous to be confronted with a younger version of yourself in that way. I did have some sympathy for Clo over this but I’ll be honest, it was short-lived!

There is also something very unsettling about the house Clo moves to, and it’s not just her relationship with Marion. The owner has a strict routine of when he’ll be there and what he expects of all of his staff. It felt very oppressive, even though it’s a beautiful house on the beach. There is an escalating claustrophobic feel to it and it really adds to the atmosphere.

There is a lot of paranoia throughout the book, and it unsettled me as I was reading – I couldn’t be sure of what was real. I loved this aspect of the book because it kept me on my toes, I could never get complacent about what I thought might happen. Clo seems to be in control at some moments but then not at others so I was never sure if she was to be trusted. There are twists and turns throughout this book and the end when it comes had me reeling!

Into the Silent Sea is a dark thriller and it definitely proves that hell hath no fury like a woman scorned! It’s a real rollercoaster of a read – it’s unpredictable, gripping and thrilling! I recommend it!

Many thanks to Anne of Random Things Tours and Claire Stibbe for my copy of the book. All thoughts are my own.

Into the Silent Sea is out now and available here.

Claire Stibbe is the author of the Detective Temeke Crime series – The 9th Hour, Night Eyes, Past Rites, Dead Cold, Easy Prey. Winner of the New Mexico/Arizona Book Awards for crime mystery, silver medal winner of The Wishing Shelf Book Awards, her books have also been Amazon bestsellers, reaching the #1 spot in the top 100.

She is also a reporter for Stand True 4 Blue, which features a Nationwide Newsletter dedicated to law enforcement, a member and graduate of the Citizen Police & BSCO Sheriff’s Academy. A former journalist and magazine editor, she now lives in Utah with her husband and son.

These books provide donations towards the counseling of single mothers after suffering from domestic violence and post-traumatic stress.

Find out more about Claire at http://www.clairestibbe.com/ 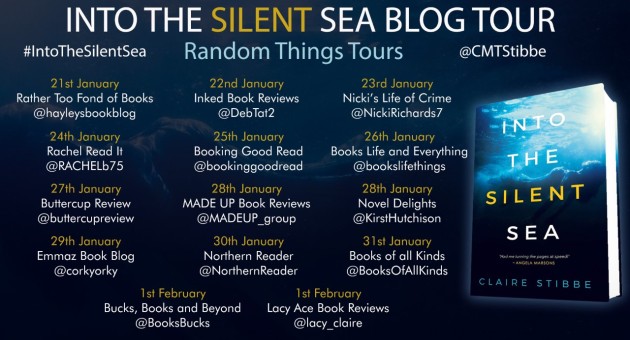 9 thoughts on “#BookReview: Into the Silent Sea by Claire Stibbe | @CMTStibbe @annecater #randomthingstours”