WHAT IF YOUR WHOLE LIFE WAS BASED ON LIES?

A gripping new psychological thriller of secrets and revenge.

When Joe Lynch sees his wife enter an underground car park in the middle of the day, he’s intrigued enough to follow her down.

And when he sees her in an angry altercation with family friend Ben, he naturally goes to her defence – and doesn’t for a minute believe the accusations Ben makes against her.

It’s pure misfortune that, just as the clash becomes violent and Ben is knocked unconscious, Joe’s son has an asthma attack, and Joe has to take him to safety.

I was initially drawn to the cover of this book and then once I read the synopsis I knew it was one I had to read.

Lies is the story of an average man, who lives an average life and is perfectly happy with his lot. Then one day he sees his wife somewhere that she shouldn’t be and the story ramps up from there.

I did work out how this novel going to end part-way through, apart from one aspect of it, but it was actually really satisfying to be right and thinking back over the novel it did feel like all the clues were laid out for me to figure it all out. Sometimes thrillers have an ending that it’s impossible to work out and it can leave you feeling like it was just plucked from the ether but not this novel. It has a satisfying ending too, which I appreciated.

None of the characters in this book were particularly likeable but that really worked within the story because it meant that I really didn’t know who to trust throughout the novel.

I did find myself getting a bit annoyed at certain points in the novel where a character (no spoilers) seems quite tech-savvy in one moment and then in the next misses a really obvious thing that they could do, which would really help them. It took me out of the story a little when this happened but it’s possibly just me being picky and maybe the character just isn’t thinking logically due to the stress of the situation.

This is a novel that makes you think about the things you put out on social media, and whether you can ever really know a person just by what they write on their Facebook page. It also makes you think about the decisions you make and how things may have ended up completely different if you’d just not seen something, or reacted in a certain way. It highlights how those decisions we make in an instant can have such far-reaching consequences. I really enjoyed this aspect of the book.

This is a very fast-paced thriller. The story moves forward in every chapter and it never slows down for a second. It did have me hooked and wanting to know what was going to happen next. This isn’t a complex thriller but it is fun, quick read that I would recommend and I’m looking forward to reading whatever TM Logan publishes next.

I received this book from the publisher via NetGalley in exchange for an honest review. 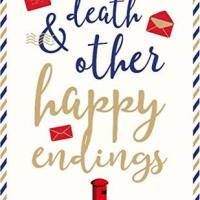